I’ve been wanting to write about video games for a while now, and so perhaps there’s no better place to start than from the very beginning of my video game history. I didn’t get to play very many video games when I was young, however there were a few standout games that I still remember to this day, vividly even. One of these games is called Burned Sky. As you may have caught on by now already, my online moniker is in part inspired by this game, and in part due to a complete lack of creativity.

Burned Sky is a very special game for me. A very good friend and I used to play it for hours on end in his bedroom, driven on by the sugar rush of Coca Cola and Limca. It was a simple game, and perhaps it was the simiplicity that we enjoyed. I distinctly remember it being played off from a CD-Disk with a distinct yellow cover. The game revolves around a rebel force of which you’re a pilot, and posses a very powerful fighter plane. Your goal is to use your plane to defeat the incumbent powers by destroying their various watchtowers, missile launchers, and fighter planes. The controls were just as primitive as the story, Up-Down-Left-Right to control the fighter, and Control-Z-X-C to fire the various weapons.

Just as much as I had enjoyed playing it, I had almost immedietly forgotten it, and I carried on with my life. In 2017 I started to enter the world of immersive media and game development, and right then, the thought of remaking Burned Sky struck me. It stayed latent for a while, till a few weeks ago, when I created a rubbish prototype of the game using GDevelop. Right after making it, I grew even more curious about Burned Sky. I kept thinking about who the developers where, where they were from, and why did they make the game in the first place?

I started investigating, and tried to figure out the answers to the lingering questions in my mind. This wasn’t as easy as you might think it is. The name ‘Burned Sky’ doesn’t provide for many relevant search results, but soon, I stumbled upon a page which promised the game as a giveaway. 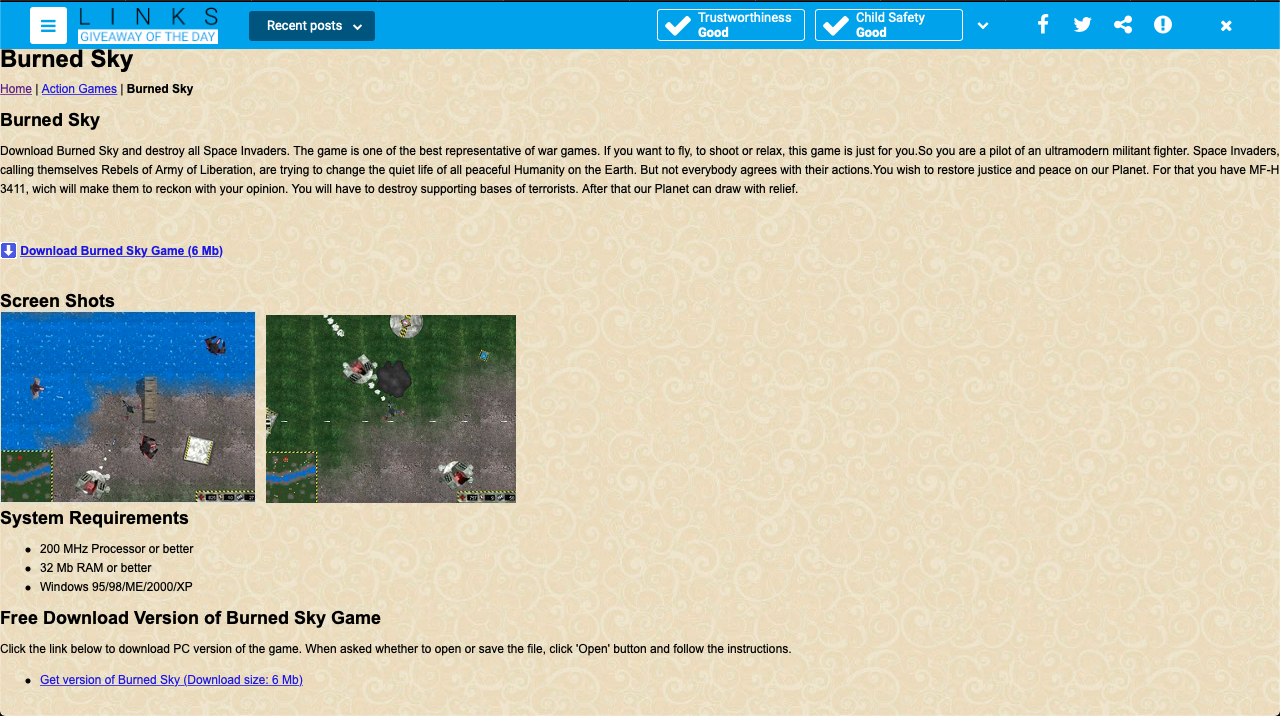 Looking at this website, my best guess is that this giveaway is dated sometime in 2007, although there’s a good chance it could’ve been posted even before that. I used the paragraph as a search term and stumbled upon multiple blogs, and websites which had simply relisted the same content-so there was nothing new. 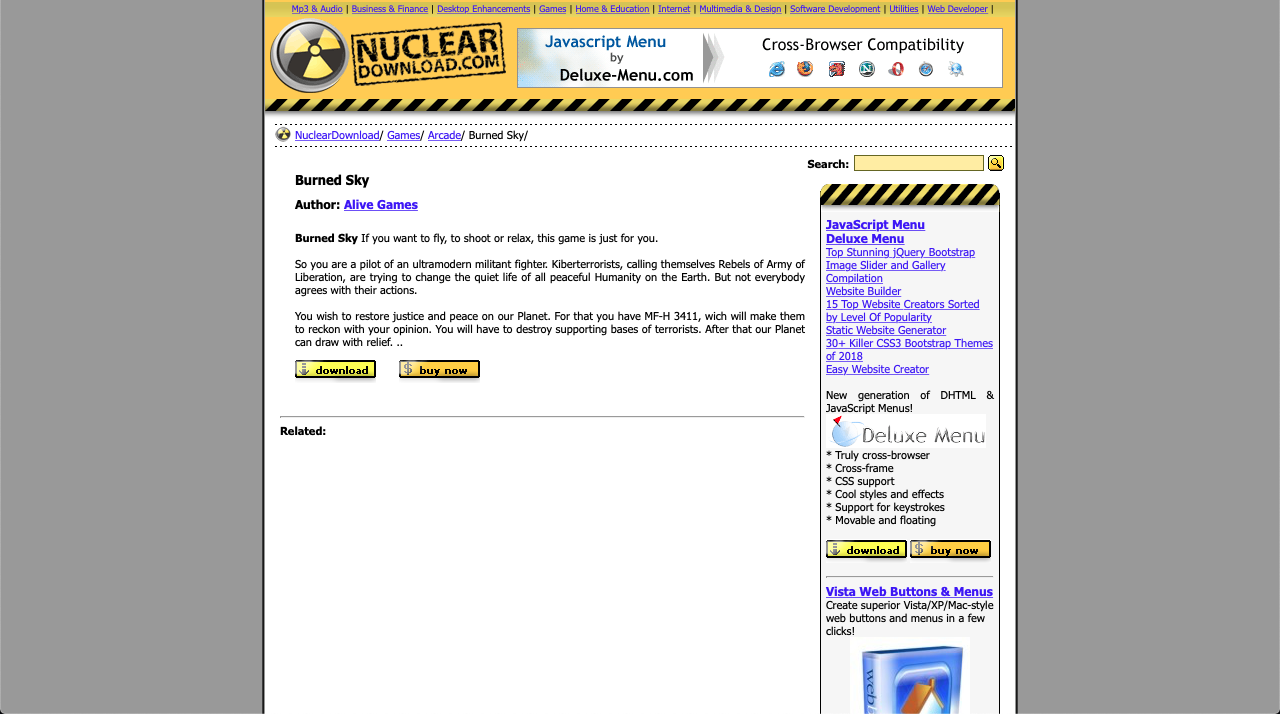 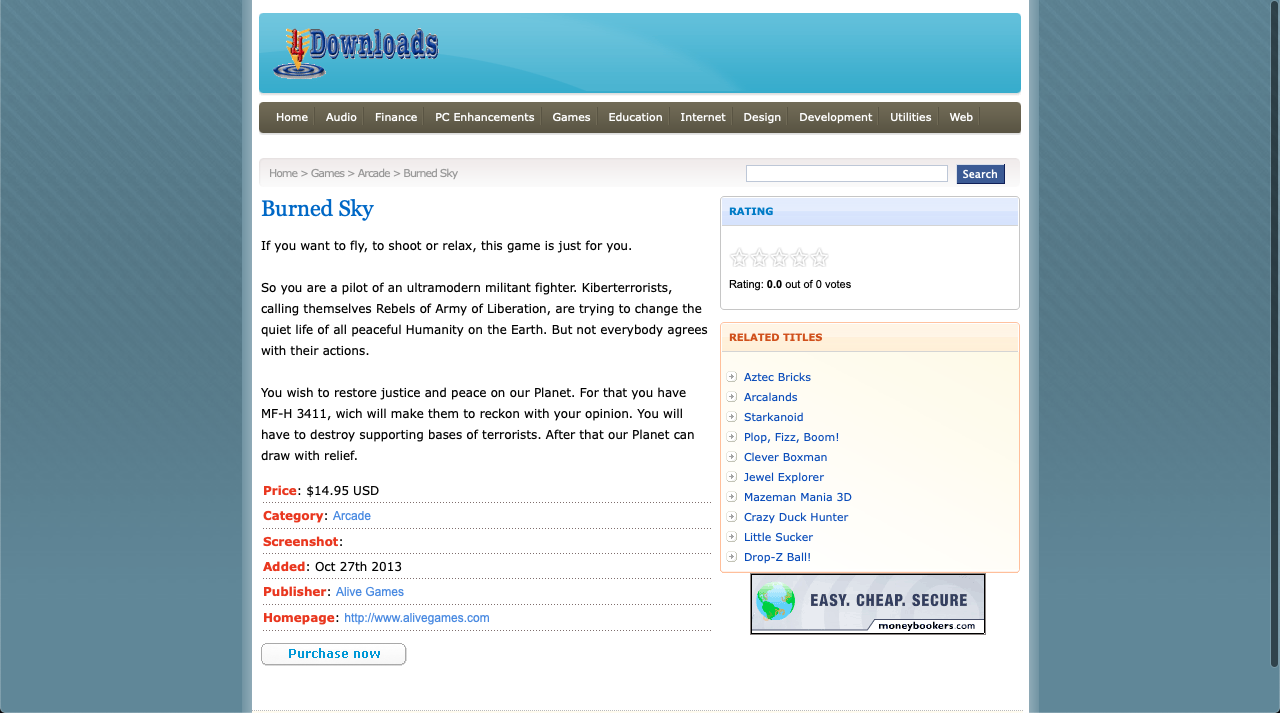 The game is listed on alivegames.com, and so I used waybackmachine to look the history of the page down the years. This was interesting, since wayback machine showed the page was practically unchanged since October 2002. The wording may have changed here and there, but the content was the same. 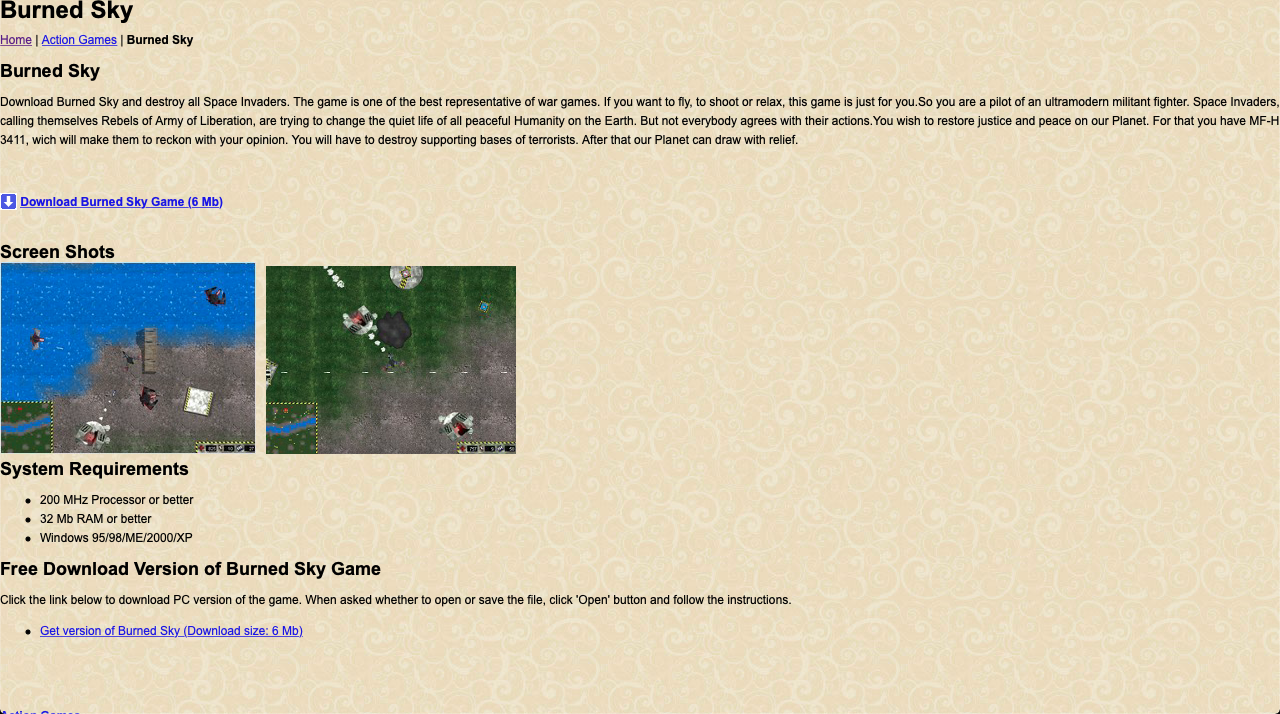 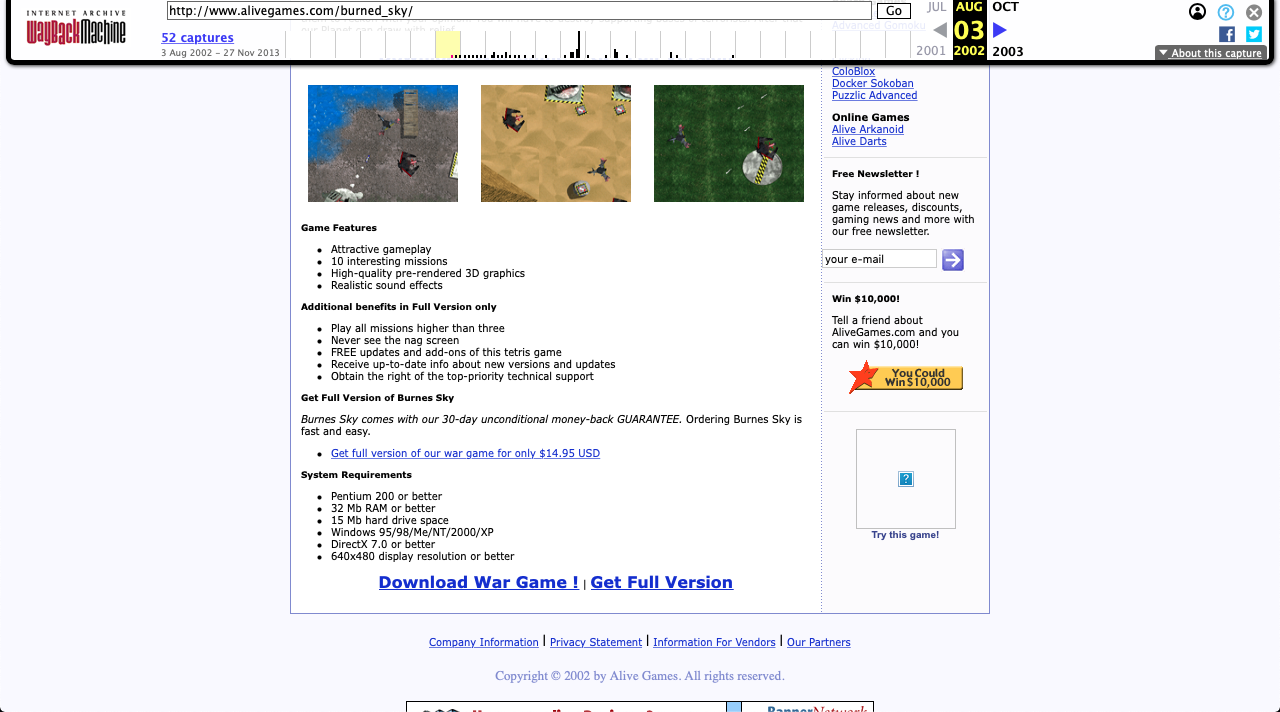 So no new clues there. I wrote to Alivegames through their Facebook page, but received no response. So I decided to just play the game and find clues within the game itself. This is a little tricker than you might think. Burned Sky is a Windows game designed to run on Windows XP, and I have a newer (2012 era) Mac. Like a square block in a round peg, this wasn’t going to work.

I downloaded the only version of Burned Sky from the Alivegames website, and got Wine to install it and play it. Although its a little buggy and tempremental, the game works and I could play through all the levels. Although if I get too many elements on screen, it does tend to crash. On the ‘Credits’ section of the main page, I saw 3 names listed unders different roles. 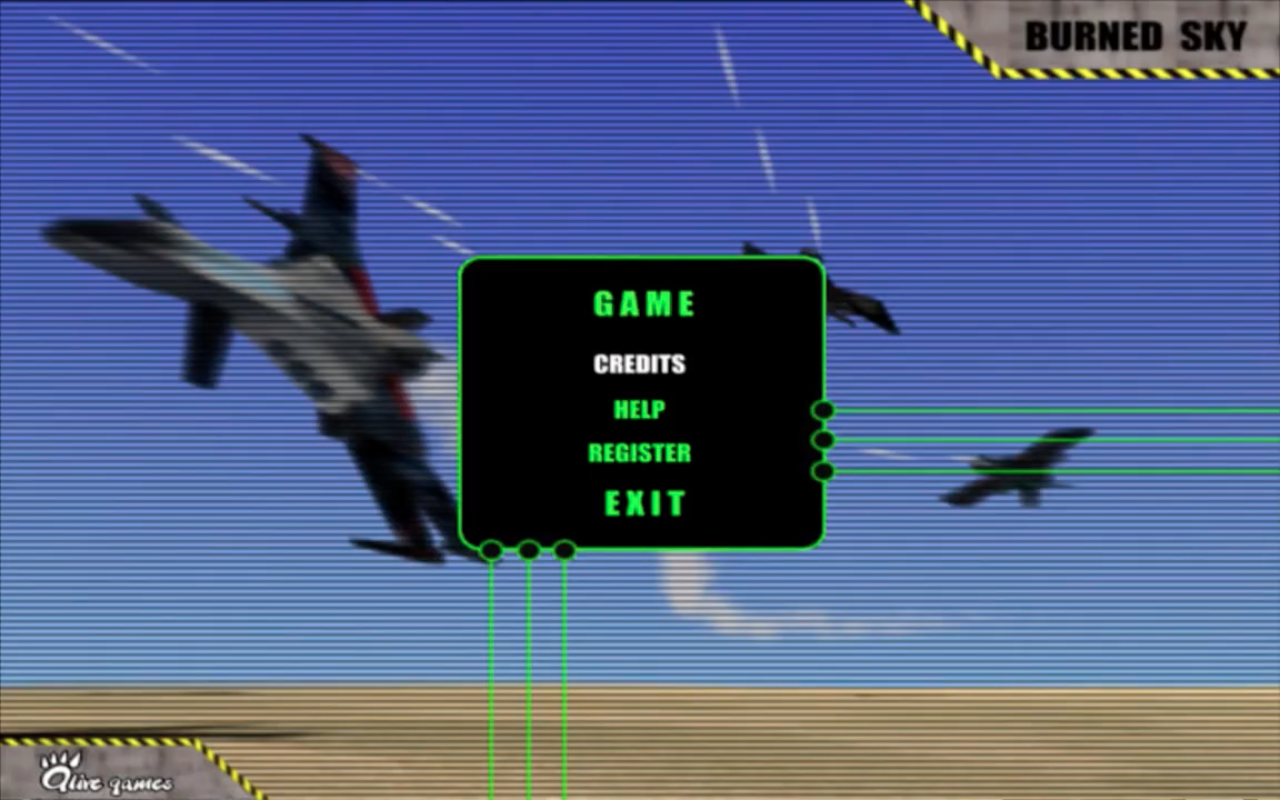 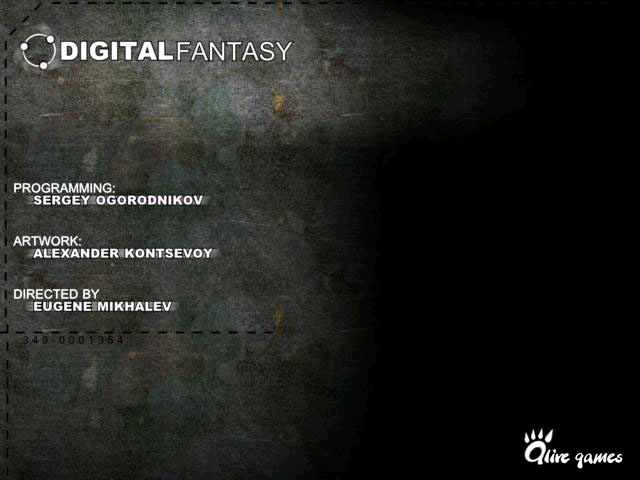 So I went about trying to track these three people down, and this was not as easy as I thought it would be. This game was made in ~2002, and so the folks who created it may not have created publicly accessible online internet profiles. Luckily there was a match for Alexander Kontsevoy, and I found his Behance page. Alexander created the artwork, and so finding a Behance page in his name was a good breakthrough. I messaged him via Behance but got no response. I’m not surprised though, since, well it’s Behance. With a little more digging around I found a Telegram number associated with this company. In my very limited experience I do know that Central Asian countries and some parts of Russia prefer using Telegram, and so I messaged on the number asking for Alexander’s contact. Within a day, I got a reply, and got the contact email that I was looking for. The person messaging me also told me that Alexander worked as a game designer a few years ago, which was really nice to hear as I was still unsure if it was the same person.

I wrote to Alexander and I got a very positive reply within a day, and he really was the same person who created the artwork for the game! It felt great to make some good headway with my investigation and research.

I asked him some questions regarding the development of the game, and I’ll paste them below verbatim to put them in context.

Alexander: Burned Sky was my very first project as a game graphics designer. Me and my fellow students were working on it for a couple of weeks when we studied at university, entitled our small partnership as ‘Digital Fantasy’ and tried to self-produce the game through some websites. As I remember, it was released in 2002, eighteen years ago. Anyway, it had almost zero financial profit (frankly, the game is kind of trashy). So unfortunately, there was no “full version”, the game you played is the only one that was released.

Salil: I wanted to understand the context behind Burned Sky, and how it came together. What was the planning like and how did you figure out the final story and design of the game?

Alexander: As it was our first project, the planning was really simple: we decided to make a game that we could handle with our limited skills. So it should not take too long to develop (short term is really important, because indie developers loose motivation quickly), be technically simple and have some sort of automation in terms of gameplay building. I don’t quite remember who came up with the idea of 2D shooter, but our programmer Sergey said that he can handle coding 2D sprite engine with 1-bit transparency (not a commonly used 8-bit alpha-channel).

So we agreed that it should be a game with aircraft that flies around and shoots, and I got to the graphics straight away. There was no story behind it at first, I just created 3D models and textures and we tried to make it work and look nice. The story actually came later, when I assembled levels and pre-level screens. We needed to add some explanation on the mission objective, so I came up with short text intros that finally became some kind of a plot. Noone actually took this seriously, so the story is almost non-existent and shallow. I guess that “Rebels of Army of Liberation” was added to the game description at publishing, there are no such details in the game at all.

Salil: I found a version of the game in 2002 via waybackmachine on alivegames.com, see screenshot below. Were there any other versions of the game, or updates released after the first version?

Alexander: Alive Games is a publisher company – two local guys that tried to make some money on selling indie games, and we gave them Burned Sky for publishing.

As I mentioned earlier, there were no other versions. I think that the game was simply stripped down and provided access to all levels after you buy the ‘full version’, but you still can see all pre-level screens in the graphics folder (they are not even compressed), so you can see what is the actual game size is (it was 10 levels in total, if I remember right). I’m also not quite sure how the game was protected, but I think that you simply got the missing level data files when bought a ‘full version’.

Our director Eugene also released Burned Sky Shooter a bit later – a mini-game with a similar name. It had nothing in common with Burned Sky, except for the graphic sprites, and actually was a Space Invaders-like shooting action that ran directly over your desktop.

Alexander: Everything took two or three weeks. We did not use any ready engine, Sergey wrote something himself. I believe the game used DirectX Windows API, and bitmap sprites for aircrafts positions (different rotation angles), and uses a key color to indicate transparency. So the engine does not even rotate the sprites, just draws them. Really primitive.

To assemble levels, we created a small application that allowed to open/create level file, specify level size (like 64x64 tiles), draw with different tiles on the map and save.

All coding was done in Delphi/Pascal. Not a regular choice for gamedev, but Delphi was popular those days for ease of entry and rapid development.

Salil: Were there any other ideas for the game? Do you still have the art for this game, or any other rejected ideas/concepts?

Alexander: There were no sketches, tryouts, on unaccepted versions. I simply created models in 3DSMax using my experience as a 3D-modelling hobbyist, rendered them and tried to make them as good as I could at the moment. Others had even less expertise in graphics, so there was no criticism and everything that was done got right into the game. The same is for the programming part: Sergey was working on the engine and others did not affect his work much. We all wanted to create something finished, and did not care much about polishing and perfection – we simply did not have enough skills to do anything significantly better.

The only thing that was tweaked a bit is gameplay – the aircraft acceleration, max speed, set of weapons, how they work and how much power they have. We wanted to achieve a playable result that was fun, but still challenging. Not sure that we have dialed it perfectly :)

As for the art, I think it is gone with my old computer. I did not back up anything then (now I do), and lost a lot of my early 3D artwork and other stuff. That is also the reason I cannot recall the dates perfectly: I’m used to rely on records and file creation dates, but do not have them now.

Salil: What are the other game projects you were later involved with? Any exciting ones you’d like to share?

Treasure Hunter is also kind of trashy and not really playable (insanely hard!), but it’s in 3D. I also have an archive with the full version. It still can be run, but works weirdly on modern graphics cards.

Then in 2006 I got a job in a gamedev studio, Funlime Games, and created several fun games with them:

Salil: Whatever happened to the other team members? I can’t seem to find them online.

Alexander: The guys are fine :) As far as I know, Sergey and Eugene did not work on any games after that, except for Treasure Hunter (it was done by me and Eugene) and Burned Sky Shooter (Eugene’s mini-project). They went into business applications development and management.

So among us three, I had the most experience in gamedev (still pretty humble though), but finally quit Funlime games in 2007 and switched to web and mobile UI design.

It was great to finally understand the context and speak with one of the developers behind on my favourite games. Next up: Skies of War.